If you prefer to skip right to the code, go here: https://github.com/GoogleChromeLabs/wasmbin

Few months ago, I've been playing with various WebAssembly analysis and transformations in Rust and had a chance to try out several parsing / transformation / serialization toolchains.

As I was exploring this space, I've realised that what I really want is an API that would be high-level enough to allow me to work with the WebAssembly module AST as a natural Rust structure, yet low-level enough to preserve the binary contents of the module for any parts I don't modify in the process.

Here are some examples of toolchains I've tried and their pros/cons for my particular goals:

Once again, I want to reiterate that since are my personal pet peeves that applied to the weird and fun use-cases I've been playing with, and by no means are indicative of how good one or another library is - all of them are successfully used by a lot of other people, and are likely to work for you too!

Now, one thing you should know about me (in case you haven't noticed from my blog yet) is that I'm a parsing nerd. So what these "downsides" did provide for me, was an excuse to try and build my own low-level parsing/serialization library for WebAssembly.

Moreover, as any parsing nerd, I love Rust macros. I've blogged about writing them before, I've used them in various projects, and generally consider them a powerful tool that can significantly increase readability and maintainability of code when used correctly.

So what I wanted to do for a while is to build a parser & serializer that would fully self-generate themselves using a macros. This way, I as a maintainer would only have to correctly describe all the structures and not bother with handwriting any implementations except for the core types. Think serde, but combining custom Deserialize & Deserializer for one specific format (offtop: there are reasons why "just" using Serde wouldn't work here, but it's a bit out of scope of this post).

This brings us to custom derives. To recap, most of the Rust code out there relies on a powerful feature called derive - a special kind of macros that can be put on any user-defined type and used to auto-generate an accompanying implementation block.

those Hash and PartialEq within the derive attribute get expanded into a code that recursively walks the structure fields and does the "right thing" to fold the results together:

What if I could define all the necessary structures corresponding to the WebAssembly spec and put a custom derive in the end that would take care of generating the rest - parsing, serializing and visiting code?

And this is how Wasmbin was born. First of all, I've defined a couple of core traits:

Then (not without a help of few other macros for templating) I've defined those traits on all necessary core types, according to the rules of the WebAssembly spec.

For example, the implementation for u8:

Then I needed to do the same for container types. E.g. slices / vectors of "countable" items:

Once I was done with all the core & helper types, I could write a proc-macro to handle the custom derive. From here on, defining the Wasm structures was a breeze.

Let's take an Import node for the example:

Under the hood, this auto-generates corresponding implementations by recursively walking over fields, just like other traits do:

For enums, I've leveraged the recently added discriminant support for arbitrary enums. It's currently natively supported only on nightly Rust, but if I drop another custom proc-macro in front (#[wasmbin_discriminants]), then I can "polyfill" the support by reading the discriminants and stripping them away for the stable compiler:

This way, I'm telling my derive code that the discriminant should be parsed as a u8 and then matched to parse the corresponding variant (and vice versa during serialization). The example above generates code like following:

Now, you might notice that I've introduced another intermediate decode trait for enums. The reason here is that I've made my API work with arbitrary streams. It means that, once a "discriminant" (the byte which determines which variant should be parsed) is taken from the stream, it can't be put back.

This could be a problem for nested enums, where we don't know in advance which variant is going to be matched. For example, before the introduction of multi-value types, my BlockType definition looked like this:

Here, the autogenerated code needs to read a discriminant and match it against 0x80. If it matches, then the variant is Empty, but if it doesn't, it needs to reuse the same discriminant to parse the nested ValueType instead:

If ValueType would implement only Decode directly, there would be no way to pass the same discriminant again (another alternative could be to allow only peekable streams, but it would be a user-facing inconvenience and not worth it for just passing one byte around).

Similarly, I can put derive(Wasmbin) on most other structs and enums that Wasm module consists of. For example, this is how the definition of the ValueType enum looks like:

Or, probably the most interesting one, Instruction enum (showing only part of the list because the full one is huge and would require even more, potentially erroneous, code if not for auto-generation):

Of course, there are few exceptions that can't be mapped as easily and need to be handled manually. For example, I've mentioned that the BlockType definition above was before the introduction of multi-value types to WebAssembly.

In order to accomodate for multi-value types, the spec definition was modified to the following:

Block types are encoded in special compressed form, by either the byte 0x40 indicating the empty type, as a single value type, or as a type index encoded as a positive signed integer.

That is, now only a difference in the bit pattern determines whether something is a ValueType, or a beginning of a LEB128-encoded 33-bit signed integer that should be treated as a type index for the multi-value type... Yeah, there is no good way to automate this and it's easier to define encoding/decoding manually.

Still, aside from those edge-cases, the autogenerated implementations are covering the majority of the spec and have been a huge boost to the maintainability and ease of future additions.

For example, this is all it took to implement the tail-call proposal:

Generally, you can access and modify fields directly on arbitrary type, as well as ::decode(...) it from a stream or .encode(...) to one.

Aside from that, the top-level Module type has a couple of extra convenience helpers, with few of them - in particular, retrieving and inserting sections in the correct order - inspired by other libraries mentioned above: 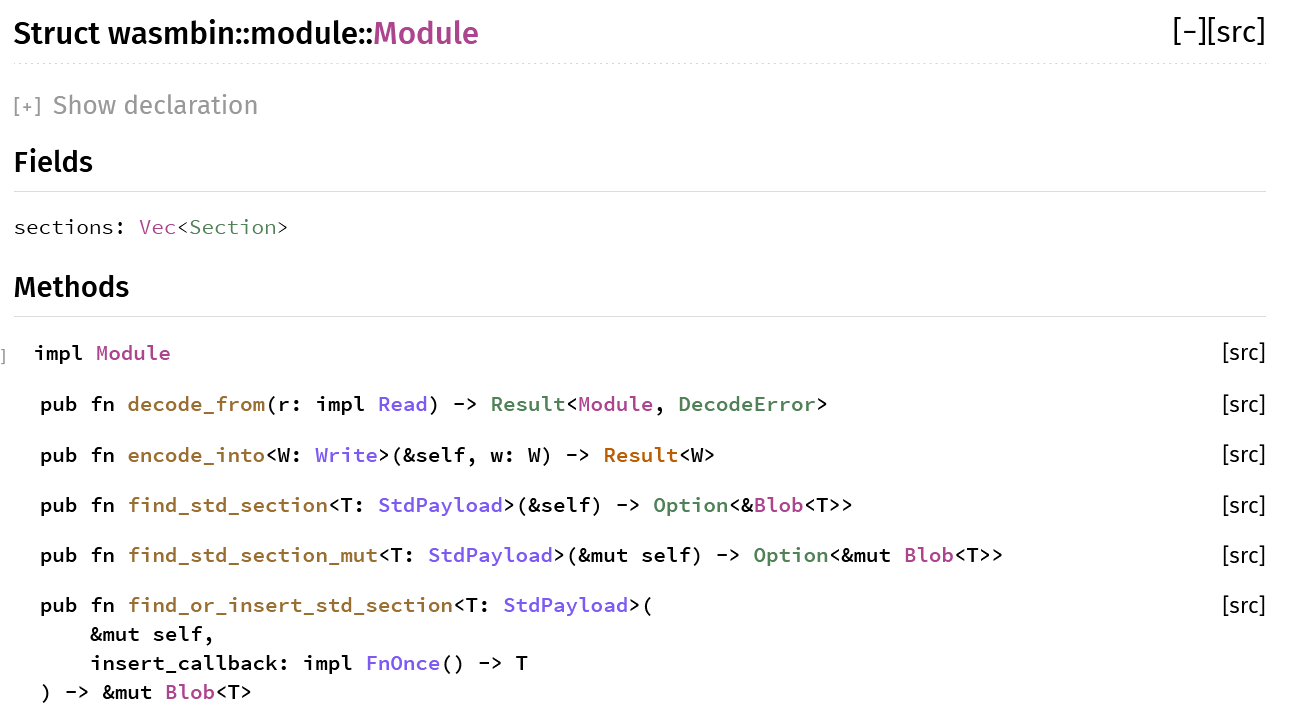 Sections are represented as a vector of tagged enums rather than properties to guarantee order preservation.

In the WebAssembly spec, each section is preceded with a byte length to make it easier for parsers to read them lazily, skip them, or even read in parallel. In the Wasmbin type system, this is implemented via a lazy Blob wrapper which you can see in the bodies of each Section variant above.

It means that, when you decode a Module, then only raw byte vectors are read for each section. Later, you can choose which sections you actually want to decode and when. For example, if you were to find an import for env.memory you could write code like the following:

In this case, Blob::try_contents will lazily parse the contents on the first access and store them for future reads.

As an extra optimisation, if you don't modify the section, then during reserialization it will use the original raw bytes, but if some section is modified by accessing Blob::try_contents_mut instead, then it will recursively serialize the contents, too.

You can find the full API with several more traits and methods here: https://docs.rs/wasmbin/latest/wasmbin/module/struct.Module.html

This post wouldn't be complete and fair without talking about trade-offs and downsides of this approach and the current implementation. Just to name a few major ones I keep in mind:

Let me know if you find wasmbin useful or have any questions about the article, please do let me know either on the repo or Twitter!